The baby’s sock is coming along.   The sock is knit in the round and starts from to bottom but leaving the sole to be added later.  The pattern is less clearly written than today’s and I had to pull back a bit when I missed the start of the garter stitch band.

My sample is knit in coarser wool than the original was intended to be and the needles are a tad finer than they could be for this yarn so the sock is possibly more like a slipper than a sock.

From the side the sock looks very like the illustration. 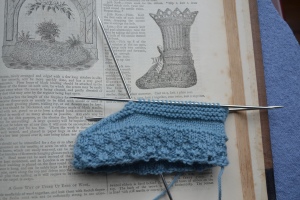 But the illustration doesn’t show the very nice little band that the shapings on the top of the foot forms.  There is a central band of two knit stitched with a slip one, knit one , pass slip stitch over on each side.  If I were to make this sock for real I would make a left leaning decrease on the right side and a right leaning one on the other to balance them. 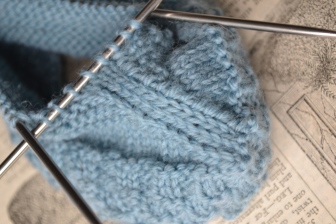 A Knitting Tip from the Sheep

If you have never knit on double-pointed needles (dpns in knitting jargon) don’t be put off at the start.  The first few rows are the most awkward to deal with but once there is a bit of fabric formed it gets a lot easier.  I enjoy knitting on dpns but I definitely don’t want to have to knit those first few rows more than once.

So take a few moments after casting on to check that you don’t twist the work when you bring the two ends together to start knitting.  Line the needles with the stitches distributed as specified in your pattern. 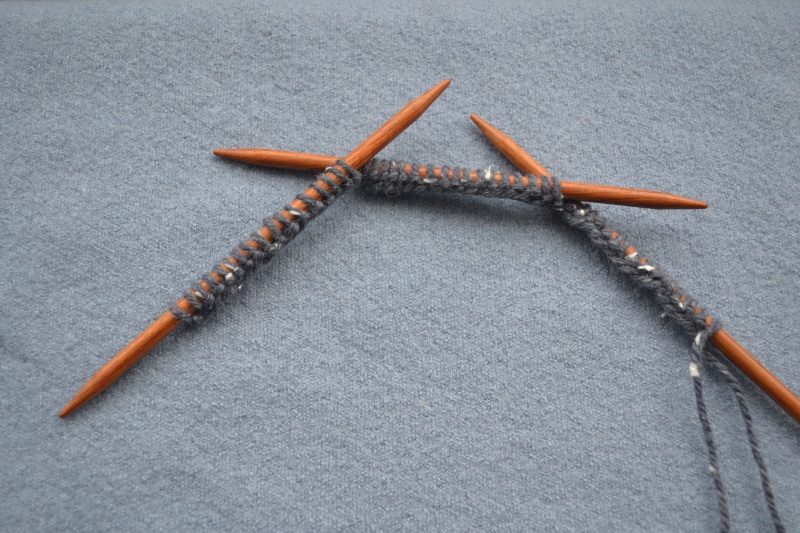 If you do have a twist in the work you might not realise it for a number of rows – but once you do there is no alternative but to rip the work back and start again.

For my first Knitting from History feature I am attempting to re-create a sock from The Girls Own    Paper from 1880.

The sock is knit in the round.   I am using Rowan 4ply wool and 2.75mm needles which seems to be about the right for a reasonably close fabric.  This is a experiment and not intended for to any tiny recipient to wear.  My main interest is to explore how the pattern works and how the way it is written differs from today’s patterns.

I’m also intrigued by the idea of following instructions that might have been followed by the original owner of my copy of the magazine      over 130 years ago.

As every writer on knitting always says the first step is to read right through the pattern.  The sock is illustrated by a line drawing and the first surprise is that the illustrator and the writer don’t seem to have collaborated very well.  The illustration shows a deep lace edging. That looks fun to knit I thought. The writer had different ideas,  “A crochet edging would make a nice finish, quickly done. The knitted one in the illustration is rather too deep.  The following would be very similar, though rather narrower.”

But I’m jumping ahead.  First to cast on 80 stitches and after a foundation row start to work the checked band around the base of the foot.

I’ll keep you updated as the project progresses. 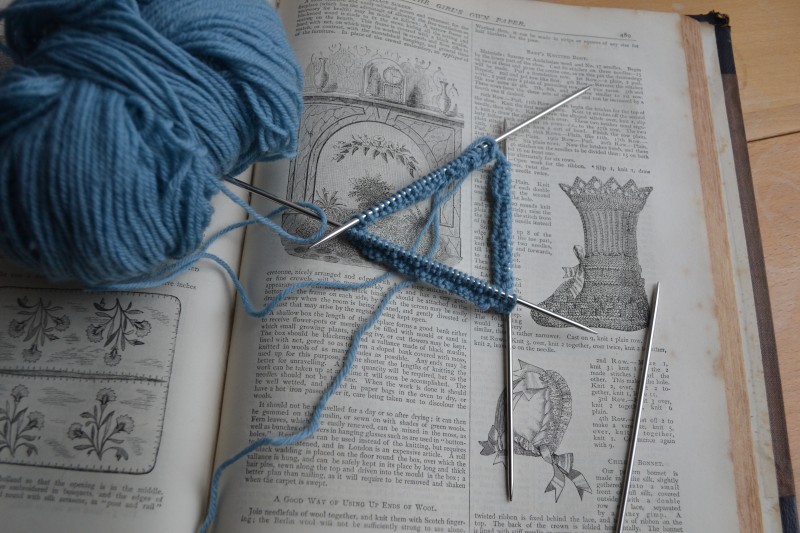 On holiday in Florence last summer I left the well trodden tourist streets to visit the yarn store Campolmi Roberto Filati.  It’s in a quiet street not far from the Duomo.  A small window display showed I’d found the right place but inside it was very different from UK yarn stores. It was as much a warehouse as a shop.  Most of the yarn was wrapped uo and on shelves behind a high wooden counter.

There was a display of small samples – each shown in just one colour, and I was a bit discouraged.   I like to be able to squish and muse.

A young woman came up and asked if she could help.  I had recently completed an angora shawl that I’d enjoyed knitting so I said “Angora” on impulse. She went off and returned with a black card folder of colour samples for me to look through.

She also pointed out a cardboard box in a corner full of fat skeins of discontinued yarns.  I had a root about.  None of the colours did much for me until I uncovered a bright sunshine yellow.  I instantly thought of my teenaged daughter  and a chunky scarf or cowl.  There were no bands giving yardage details and to be on the safe side I pulled out two skeins which the assistant assured me would be plenty. (It was – I have a full skein left.)

I finally left with the yellow angora, some deep crimson alpaca for a shawl for me, and balls of alpaca in three natural undyed shades which I thought I would use for mittens.  For yarns not in the discontinued bin the system was that you pick out a choice from the samples in the black folder and the assistant went off to fetch it from a stockroom.  The final bill was less than I expected and I had the impression that if you can deal with the unfamiliar process the yarn is good value.

The yellow was the first onto the needles.  I had no information about the yarn.  I was planning a scarf so all I really needed was a pattern and bit of trial and error to find a needle size which gave a gauge which felt right for a soft scarf.  My daughter chose a Jared Flood pattern, Wayfarer. 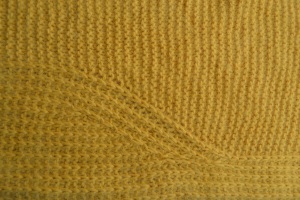 The pattern features two textures with an interestingly shaped transition.  I cast on eight extra stitches to make it a bit wider but otherwise made no changes. 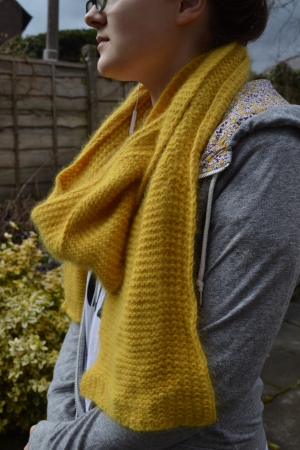 So when she wears this scarf my daughter is wrapped in a bit of Florentine sunshine.

Q.  Do you buy yarn as a souvenir?

Knitting for the family, inspired by the world...

Did You Make That?

Leading UK sewing blog where we believe creativity is contagious

The adventure of NikkiM

For the Knit of It
Yarn Harlot